I encountered my first Solomon Islands native gesneriads last week while on Isabel Island. The region has been tragically logged in the last decade, so finding them took quite some effort. We hired a guide and two porters from the inland village of Tirotonga to attempt a summit of the highest peak on the island, Mt. Kubonito - a 1200 meter mountain that can only be reached through kilometers of winding, difficult mountain trails. After much toil, we reached intact, solid habitat and Cyrtandra and other gesneriads were located. The team was instrumental in making this happen and both members from the Forestry Minisitry and the Tirotonga men were excellent at spotting gesneriads. This was good, because I had to keep my eyes firmly planted on the trail most of the time! 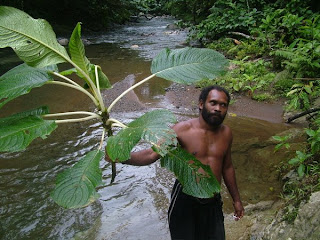 The first species we found is most likely related to Cyrtandra fulvo-villosa or C. cominsii. It is a large monopodial shrub with tight rosettes of large, petiolate leaves. Notice the length of the greenish-white petioles; they are at least 30-40 cm! The flowers are born in tight clusters in the leaf axils.

The man pictured with this specimen is Hudson, our guide from Tirotonga village. 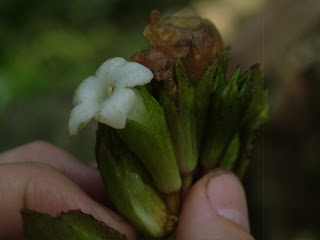 ~~~~~~~
The next gesneriad we came across was Aeshynanthus solomonensis. This was my first Aeschynanthus sighting in the field, so I was very excited to find it. Although it is typical for the genus, its range is unique - it is the only known Aeschynanthus found in the Solomons and yet it is quite common throughout the archipelago. I am curious to know how it is related to other species living further West. 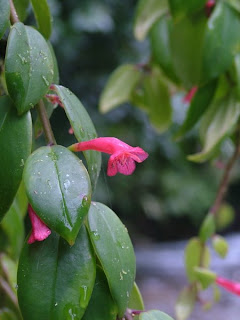 The calyx is rather small on A. solomonensis (less than 1 cm), and the lobes are tinged with pink. The corolla is dark pink to sometimes red and the throat is lined with wine red markings. The leaves are glossy and dark green above, lighter green below.

Some areas of the trail were littered with fallen red blossoms from populations that could be seen in the canopy above.

~~~~~~~
Another species of Cyrtandra that we found I believe is C. laciniata. However, it differs in several respects from Gillett's 1975 description of the species, warranting further investigation. 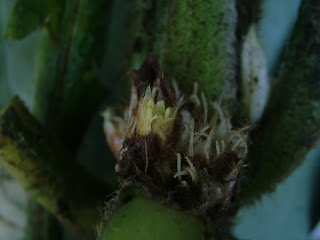 It is a large shrub with dense hairs along the stems and leaves. The calyces are greenish white and the flowers are small and white or pale yellow.

~~~~~~~
On a hellacious treck to the sumit of Mt. Kubonitu, we located an amazing little population of Cyrtandra erectiloba. This species, often found growing above 900 meters in cloud forest, is most likely part of a lineage that is different than all other Pacific species of Cyrtandra. C. erectiloba and related species found in Southeast Asia are characterized by nearly glabrous, stout leaves that superficially resemble oak or chestnut leaves. 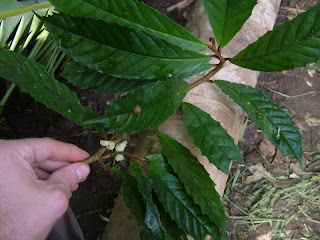 The leaves are also pseudo-alternate; the opposite leaf of a pair is reduced to a scale-like bract, similar to what is seen in many species of Columnea. If it had not been for the characteristic flowers, I don't know if I would have recognized it as a Cyrtandra! 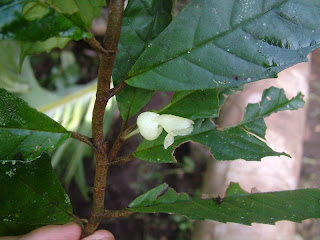 Note also the white, inflated calyx. Flowers in this species are born on hard, wood stems, among leaves as well as along leafless sections of stem (not shown).

We were also fortunate enough to find the only known species in the genus Coronanthera from the Solomons, C. grandis. This species is indeed grand as it's namesake suggests - individuals were several meters tall and were serious trees. 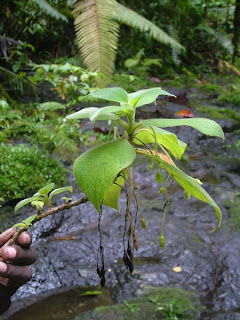 Note the long, pendulous inflorescences. The leaves and overall habit are quite similar to many species of Cyrtandra that I have observed in the field. These two genera in fact belong to different subfamilies. 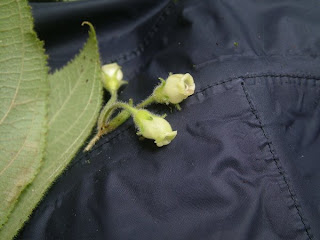 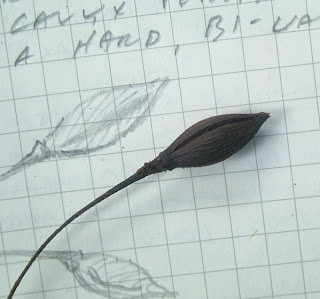 The fruit of Coronanthera, a hard capsule that dehisces along two or four openings, best differentiates this group from Cyrtandra.

I am now in the Western Province on the Island of Ghizo. I will be resuming collecting in a week or so in this area, so look for more posts in the coming weeks on the Gesneriads of the Solomon Islands. To read more about the stories behind these plant encounters, please visit my other blog, hosted by Sarasota Magazine (www.sarasotamagazine.com): Extreme Botany.

Hello from the Solomon Islands. I am in day five (or is it six?!) of this two month long adventure. The first gesneriad I've seen? An Episcia hybrid growing in a pot near the hotel I am staying in!

I will have more to say on this blog about the research and science as it develops. For now, I am posting travel updates on my other blog at Sarasota Magazine's webpage:

If interested, please click on the above link. You will find a pull down menu named "blogs." Mine is the one titled "Extreme Botany." Here you will find the more "human interest" side of my travels. What happened that day. What I ate. What made me sick. What I am sick of. Oh, yes, and what makes me happy to be here!

Thanks for the interest. More soon...