A wrap-up of fall GRC lectures

The last several months have been a flurry of activity at the GRC. Everything from continued development and fund raising to research and lectures and even a little construction work. When I finished up my Ph.D. in May of 2008 and started full-time work at the GRC, I never imagined I would be involved in all of this...or that all of this was going to be so involved. In order to catch everyone up, I will be giving a series of updates on different projects we have been working on.

Today's installment is a wrap-up of lectures that I gave this fall. As many of you know, a critical part of doing what we do at the GRC is making sure that others know what we are doing. This means giving lectures at Selby Gardens for staff, volunteers and visitors as well as traveling to other venues to inform folks on gesneriads and gesneriad research.

On October 22, I gave a lecture on the new Molecular Programs and laboratory at Selby Gardens to staff, volunteers, and visitors in Selby's Cooley Theater. Basic concepts in evolution, facts that I often take for granted as an evolutionary biologist, are oftentimes unfamiliar to many, so I started out simple and tried to include as much humor as possible (lots of monkey jokes). 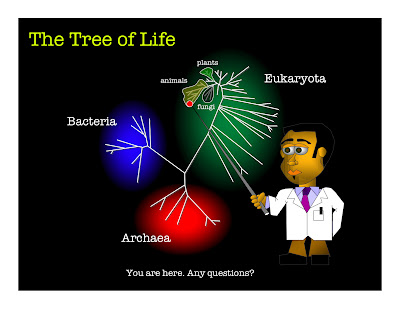 I talked about how all life on earth is related and has evolved over millions of years from a single common ancestor into all of the diversity we see on our planet today. 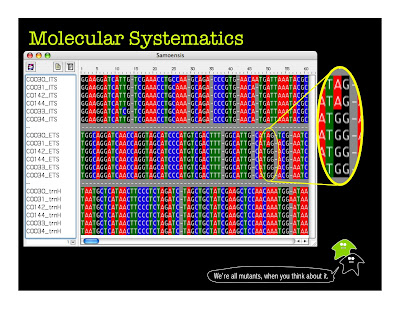 A popular feature of this talk were the "gene-gnomes" -- little characters I created to illustrate concepts in gene expression and inheritance. Not sure if everyone got it, but at least they were entertained somewhat. In this slide, I discussed how mutations in DNA were responsible for heritable differences found in living organisms. 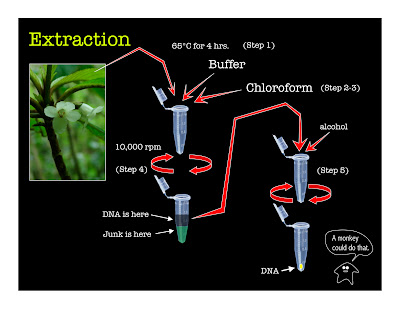 After covering the basics, I jumped into a discussion on the actual methods employed in the lab. The slide above illustrates a basic DNA "extraction". While the details are rather complex, the basics are easy to comprehend, even by non-scientists. Later slides illustrated the entire process, from extraction, to gene amplification, to reading the order of the DNA building blocks (nucleotides).

The molecular laboratory at Selby is now finished. You can view pictures of the lab and its construction here. There is also a slide show of these images in the right hand column of this blog. Look for a discussion on the lab and what we are doing in an upcoming installment of the GRC blog.

~~~~~
On November 21, I had the distinct pleasure of visiting the Greater New York Gesneriad Society to give a talk on Gesneriads around the World, a lecture I've been building and adding to over the last year. 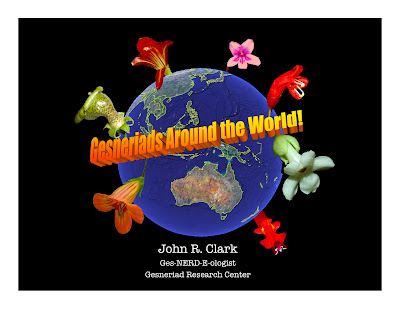 The lecture had three parts -

1) An introduction to gesneriads and discussion on when, where and how gesneriads evolved: 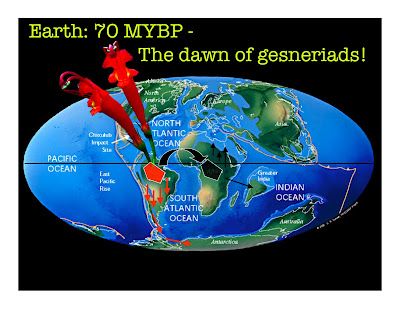 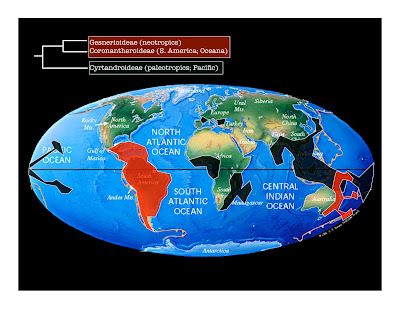 Today, as shown in this slide, gesneriads are found distributed throughout the world's tropics as well as extensions into subtropical to temperate regions in South America, Europe, Japan and Australia-Oceana.

2) Part two included an overview of gesneriad diversity from around the world: 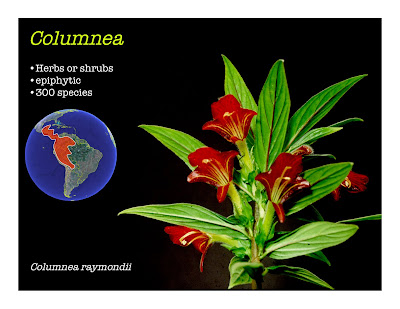 Representative genera were illustrated, along with maps indicating the known ranges for these genera. In this example, the genus Columnea is featured. 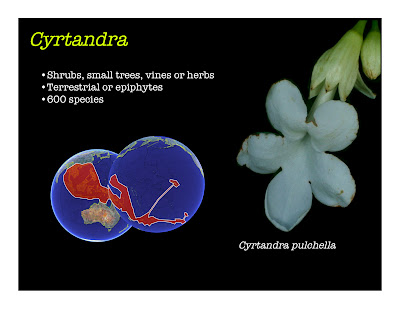 Similarly, in this slide, the largest genus of gesneriad, Cyrtandra, is shown.

3) The final part of this lecture included a more detailed discussion on how my research is focused on understanding the biogeography of gesneriads: 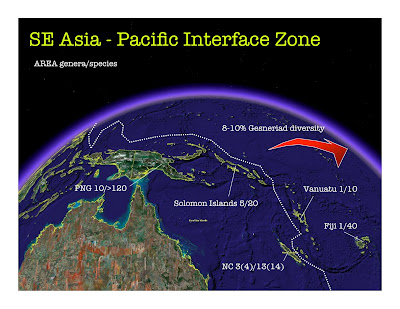 At the core of this research is understanding how and why some gesneriads have dispersed across great ranges while others have not. I have written other entries about this subject here. The lecture also featured slides and discussion on my recent trip to the Solomon Islands as part of this work. Several past entries featured some of these images as well.

~~~~~
The next major lecture was on December 3rd, a summary of my research and experiences on my recent expedition to the Solomon Islands: Extreme Botany - adventure tales from the edge of the world. 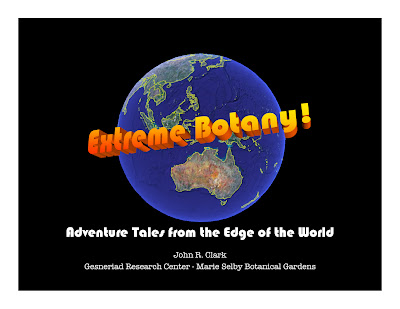 This lecture was an opportunity to talk about my experiences in the Solomon Islands this last May and June. Not simply a travel log, I used the opportunity to highlight gesneriads as well as research and conservation issues related to the expedition. 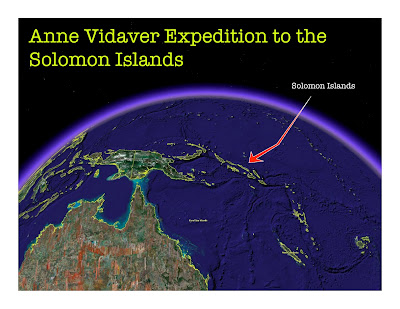 The Solomon Islands are located east of Papua New Guinea and northeast of Australia. Several genera of gesneriads including Aeschynanthus, Boea, Coronanthera, Cyrtandra and Epithema are found in the Solomons. Only one genus, Cyrtandra, makes it further into the remote Pacific. 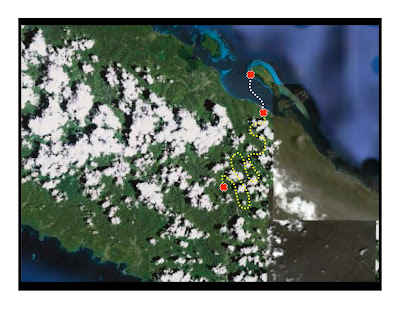 Many of slides had images of the Solomon Islands from Google Earth. On these satellite images, I included paths, areas, and features that I visited. It was an effective way to place the story I was telling into a geographical context.
~~~~~

The following week, on December 7th and 8th, I gave two lectures at Texas A & M University Corpus Christi. The first was to an undergraduate botany class in which I gave the Genseriads Around the World lecture. The following morning, I gave a scientific talk on my research to faculty and students in the School of Biological Sciences at the University. 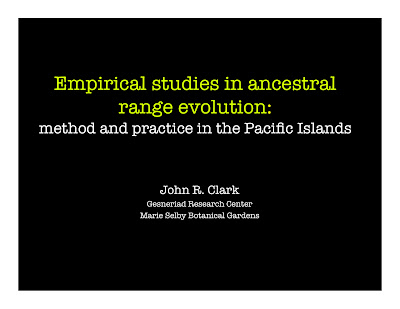 This lecture was an opportunity to talk about my research to other scientists at a level of detail that I enjoy. 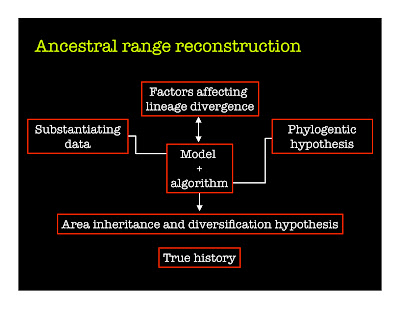 The core of the discussion was about methods used to infer the ancestral range of an evolving lineage. This schematic outlines what components go into inferring these past events. 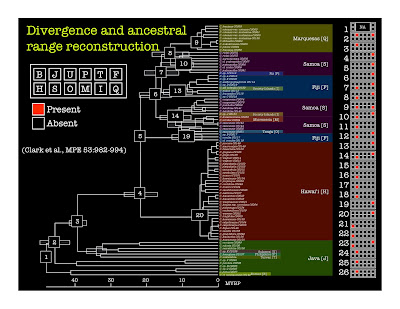 This busy slide shows the results from a detailed study of the evolutionary relationships in Cyrtandra, including divergence dates (i.e., how old the lineage is), and when and where lineages evolved. These data support the hypothesis of a Fiji-first expansion of Cyrtandra into the Pacific followed by divergence and dispersal of other lineages into the remote Pacific from this "center of origin." 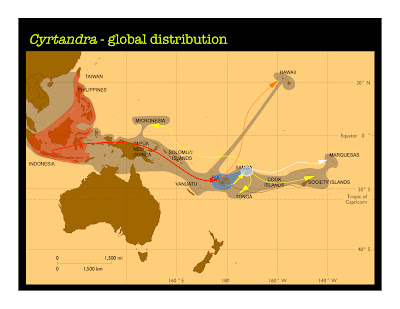 This map is basically a summary of the complicated results in the previous slide. The gist of it is that Cyrtandra dispersed to Fiji and Samoa and from there, numerous lineages populated the remote islands of the Pacific.
~~~~~
The New Year, 2010, promises to be an equally full lecture schedule. This month, on January 21st, at 12:00 p.m., I will be giving another update on Molecular Programs for Selby Gardens volunteers and guests. Check back here in the next few weeks to learn more about other upcoming GRC lectures and events.
Posted by John R. at 10:42 AM No comments: