More gesneriads from the Solomon Islands

As I have continued my explorations of the Solomons, I have encountered several more species of Cyrtandra, this time on Kolombangara Island. 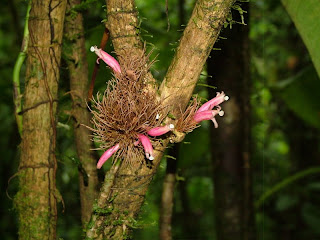 C. filibracteata is a common understory shrub found throughout Kolombangara and presumably most of the Solomon Islands. The species’ red flowers suggest bird pollination. It is apparently tolerant of disturbance and occurs in large numbers along alluvial plains, landslides and recovering deforested areas. Among forests near sites we visited it can be found growing in a variety of areas including hillsides, gorges and along streams and riverbanks. The species can be easily identified by the large 3-5 cm inflorescence clumps growing on the woody trunks and stems. These clusters superficially resemble epiphytes growing on the tree but are in fact a part of it.
~~~~~~~
We also saw a few specimens of what I previously called Cyrtandra cominsii. I now believe this identification to be incorrect and have started calling this "C. sp. A." I don't think it is a "new" species but I am having difficulty in positively identifying it. 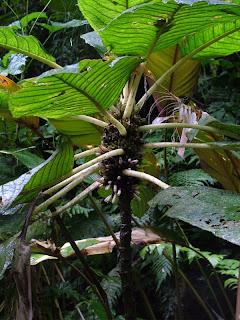 C. sp. A is common along wet, umpland areas, particularly along stream and river banks, and should be readily identifiable using herbarium records. This species appears to be more susceptible to disturbance and/or adverse conditions than C. filibracteata and was found in far fewer numbers. The long, often white petioles, clustered at the top of stout, large-diameter stems, is perhaps the most recognizable feature of this species. Inflorescences in the leaf axils accumulate decaying flowers and other debris forming a layer of thick sludge from which the ripening, white fruit emerge. 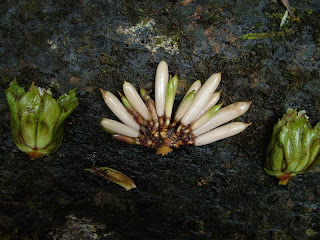 ~~~~~~~
What is more likely C. cominsii or a closely related species is pictured here. 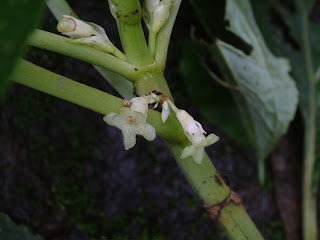 This species appears to be part of a group of cyrtandras that are distributed throughout the Pacific. Related species are principally found in the Solomon islands, Fiji and Samoa, but can be found as far away as Micronesia and Tonga. A remarkable feature of the current collections is their location: they were made at about 600 meters elevation. Other members of this lineage are commonly associated with ranges at or below 400 meters. Additional study is warranted. 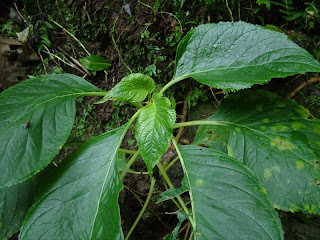 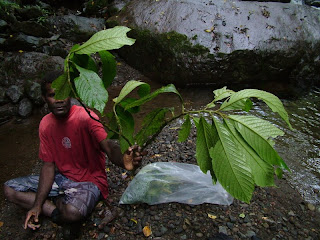 C. subulabractea is related to but markedly distinct from C. filibracteata, most notably in the placement and number of flowers along the branches and stems. Calyces are markedly different as well. Both species have red flowers that distinguish them from the other cyrtandras of the Solomons. C. subulabractea may represent a higher elevation counterpart to C. filibracteata, but more detailed distribution surveys are required to confirm this. 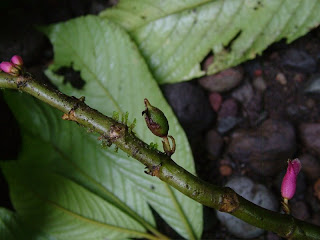 The pollinator for these species, while unknown, is possibly one of two bird species (C. Filardi and A. Uy. pers. comm.). Detailed study of pollinator visitation will be required to better understand the ecological roles of these species in the Solomon Islands.

~~~~~~~
Here is a photograph of another species of Cyrtandra that I have yet to identify. 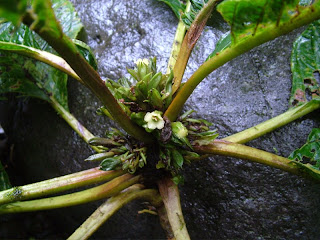 It is of close affinity to Cyrtandra sp. A, but differs in the smaller, herbaceous habit and linear, glabrous inflorescence bracts. The only collection of this species was made at over 600 meters. 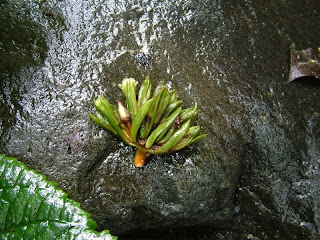 No members of the related species C. sp. A were seen near the same area, suggesting that this species may be a higher-elevation ecological replacement of the other. More distribution data will be required to evaluate this hypothesis.

~~~~~~~
Finally, we found a population of C. erectiloba, the species found only at 900 meters on Isabel Island. This population, however, was found growing at 400 meters. The species apparently has a greater elevational tollerance than I first hypothesized. 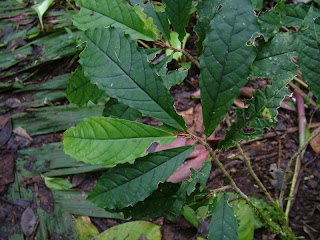 My time on Kolombangara was a fantastic journey made all the better by the hospitality and kindness extended to me by the staff of Kolombangara Forest Products Ltd. KFPL staff exemplified why the Solomon Islands are known as the "friendly isles." In particular, I’d like to acknowledge Simon LaGassicke, Vaeno Vigulu, Derol Sikua, Grayton Saghelama, Sue Vave, Tim Bula and Ferguson Vaghi for their direct assistance. For more on my adventures on Kolombangara, please check out my other blog "Extreme Botany" hosted by Sarasota Magazine.

Thank you for the continued interest and support!