By John R. Clark
An important goal we have at the GRC is increased visibility of gesneriads at Selby Gardens. The Tropical Plant Display House provides a wonderful venue to do so: inside, one can walk among many great specimens of tropical plants including various orchids, bromeliads, and gesneriads. There are currently several gesneriads to see in the Display House, both prominently featured as well as nestled into the naturalistic displays.

Upon entering the Display House, visitors can stroll along a winding path that takes them to a running waterfall and stream. The path is bordered by several gesneriads including species of Episcia, one Columnea sanguinea, and a specimen of Drymonia coriacea from Panama. If you look up and over the waterfall you will see a massive specimen of the same Drymonia; this individual, several meters long and branched many times, serves as a shade cover for plants below.
Also near the waterfall is a large specimen of  Rhynchoglossum azureum. This genus of gesneriad is unusual in many respects including the alternate (not opposite) leaves and strongly labiate, blue and white corollas. 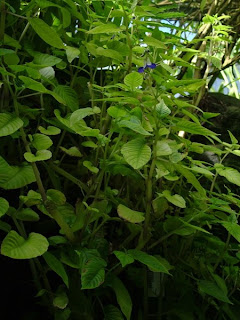 Rhinchoglossum is also unusual in it's distribution: although a member of the Old World subfamily Cyrtandriodeae, species of Rhynchoglossum are found in both the Old and New World tropics. This "disjunct" distribution may be indicative of a geologically recent introduction of the genus to tropical America from Asia.
As vistors wander past the waterfall they arrive at the Display House's "center stage." Hanging in all it's full glory is a great specimen of Drymonia pendula from Peru. This spectacular plant was originally collected by Bruce Holst on a Selby Gardens expedition. The plant's characteristic pendulous, red infloresences are unmistakable.
Selby Gardens' Display House offers visitors is a fantastic glimpse into the wonderful world of tropical plant diversity. Many of the plants featured in the Display House were collected by Selby Gardens botanists over the last 35 years. These valuable and often irreplaceable collections are skillfully maintained by the Gardens' horticulture staff, led by Mike Mclaughlin, Director of Horticulture at Selby Gardens

and Angel Lara, Selby's Greenhouse Manager. Selby staff that most often work with gesneriads includes Gail McDaniel (Collections Horticulturalist) and Angela Weber (Display House Horticulturalist and newest staff member at Selby). We at the GRC are looking forward to working with Mike, Angel, Gail and Angela, as well as numerous dedicated volunteers, to continue making gesneriads visible at the Gardens and to promote awareness of this horticulturally and scientifically important family of plants.
Posted by John R. at 2:43 PM No comments:

You have entered "The Interface Zone" 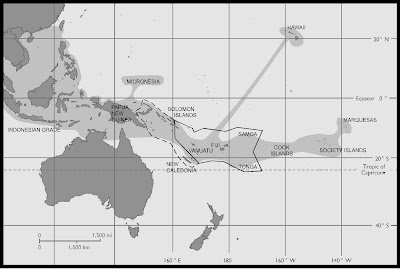 The Interface Zone: solid line indicates an area known as the "Fijian Region." The "Interface Zone" includes all of the Fijian Region plus the area enclosed by the dashed line (Fig. 1 from Clark, J.R. 2008. Gesneriads at the edge of the world...with notes on current research at Selby Gardens. Gesneriads 58: 35-38).

By now, many Gesneriad Society Members have received the newest issue of Gesneriads. On page 35 there is an article on our signature research project at the GRC: Gesneriads of the Interface Zone. We are in the process of securing funding for this project through competitive grants and philanthropic individuals. If you or someone you know may be interested in participating or supporting us in this monumental project, please contact me.

Okay...here's a bit of an overview of what we are planning to do (just in case some of our blog readers don't receive Gesneriads):

Comparative study between related lineages of organisms that differ in their ability to colonize islands can provide valuable insight into how geography may be affecting speciation. The flowering plant family Gesneriaceae (African violets and their relatives) provides a unique opportunity to examine island colonization in relation to the evolution of species: although gesneriads are found distributed throughout all of the world’s tropical forests, only one genus, Cyrtandra, has colonized the remote Pacific Islands. Cyrtandra is the most species-rich genus of gesneriad (>500 species) and has the greatest single range for any genus in the family, extending from the Nicobar Islands in the Indian Ocean to the distant Hawaiian and Marquesan Islands in the Pacific. The broad distribution and large number of species in Cyrtandra is in marked contrast to other gesneriads, including the genera Aeschynanthus (±185 sp.), Boea (±14 sp.), Coronanthera (±11 sp.), and Epithema (±20 sp.), that reach their easternmost extent in the Solomon Islands. For these gesneriads, the southeast Asia-Pacific Interface Zone is effectively the “edge of the world.”

The Interface Zone, centered on Fiji and including the Solomon Islands, Vanuatu, New Caledonia, Tonga, and Samoa (as well as other associated islands), has been implicated as a center of origin for the Pacific species of Cyrtandra (Clark, J.R. et al. 2008. Syst. Biol. 57:693-707). Results from these evolutionary analyses suggest that once the barrier to Pacific dispersal within the Interface Zone had been overcome, Cyrtandra was well suited for island hopping and continued to do so across the expanse of the Pacific. As intriguing as this scenario is, the data supporting it are preliminary and additional species sampling and further analyses are required. Likewise, the other genera of gesneriads from the interface zone are poorly known and similar evolutionary analyses have not been conducted as a result. Intensive species sampling within the interface zone, principally in the Solomon Islands and Fiji, is vital to address the questions of how and why Cyrtandra dispersed throughout the Pacific while a diverse assemblage of related gesneriads did not.

In collaboration with representatives from the Solomon Islands and Fiji, we are proposing detailed sampling and collection of the gesneriads Aeschynanthus, Boea, Coronanthera, Cyrtandra and Epithema in critical areas of the Solomon Islands (the islands of Guadalcanal, New Georgia, Santa Isabel, Choiseul) and Fiji (the islands of Viti Levu, Vanua Levu, and Taveuni) beginning in July of 2009. The Solomon Islands represents the easternmost range for all genera under consideration, excluding Cyrtandra, and Fiji is the hypothesized first step into the Pacific by Cyrtandra. Data to be collected include herbarium specimens, silica gel-dried leaf tissue, alcohol-preserved flowers and fruits, living collections, and locality/habitat information. This fieldwork will be critical for completing comprehensive evolutionary studies on these genera and are required for detailed analysis and testing of the center of origin hypothesis for Cyrtandra as well as for developing parallel hypotheses in related gesneriad genera.

Stay tuned to the GRC blog for updates on this and other exciting projects involving gesneriad research at Selby Gardens.

By request, I have added a new feature to the GRC blog: e-mail subscriptions!
It's fast and easy: enter your email address in the space provided (to the right) and click "subscribe." A confirmation email will then be sent to you by FeedBurner asking you to confirm your subscription. Click on the link and you are all set.
Good news: you only get updates when there are changes/additions to the GRC blog (generally twice a week or less). As expected, you can unsubscribe at any time.
~ John
Posted by John R. at 4:59 PM No comments: