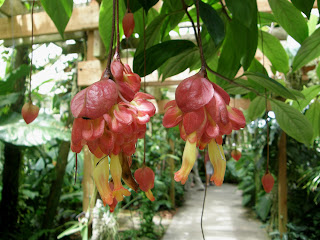 Drymonia pendula (Poeppig) Wiehler can be found throughout the Andean tropics and is one of the more striking species in the genus (shown here on display in Selby's Display House). The plant is characterized by long slender peduncles that terminate in conspicuous inflorescences flanked with red, showy bracts. The tubular corollas protrude from a mass of red calyces and are yellowish with blushed lobes. The species is undoubtedly pollinated by birds. 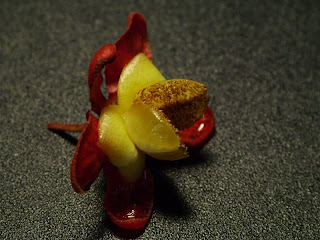 We have one specimen of this fascinating plant growing at Selby Gardens. Collected in 1998 by Bruce Holst in Peru (MSBG 1998-0223A), our specimen has been flowering for some time. Recently, several fruit have been produced. As if the flowers weren't spectacular enough, the fruit are rather showy themselves. As is evident in the photograph, the calyx remains attached (the red, leaf-like structures). The fruit itself consists of a yellow pericarp that reflexes at maturity while the inner, fleshy endocarp splits longitudinally to reveal hundreds of small seeds.
Posted by John R. at 8:50 AM No comments:

Recent happenings at the GRC

Time is most definitely zipping by. It has been well over a month since my last post and I more than owe this blog's followers an update.

First off, The GRC promotional brochure is almost complete and almost ready to be printed. We have finalized the text and images and we are now waiting on the penultimate proofs. The literature promises to be an informative and eye-catching promotion of the GRC and we are looking forward to having it for mailings, events, fundraisers and other opportunities.

On a similar note, we have been receiving a great deal of publicity in the last month, including a small article in a Sarasota regional paper, The Pelican Press. The piece featured the newly formed GRC, my position as director, and the plans for the new molecular program at Selby.

I also had the pleasure of being interviewed by our local NPR radio station. A short sound bite was aired on December 4th that introduced listeners to gesneriads, the GRC, and molecular systematics. You can listen to the segment at WGCU-NPR's website:


Just today (22 December 2008), Selby Gardens issued a press release on the new Drymonia that John L. and I are co-describing in the next issue of Selbyana. The press release can be seen on my website:


Images and details of this species can also be seen on my website: 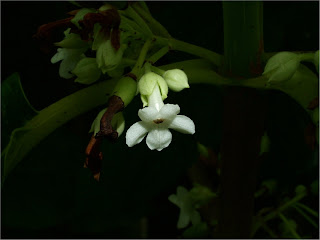 Research is moving forward as well. As part of the Gesneriads of the Interface Zone project, we have requested and begun receiving herbarium specimens from around the world representing the Cyrtandra samoensis complex of species. Cyrtandra samoensis is the only species of Pacific cyrtandras that is widely dispersed. As you may recall from my previous posts and articles, most Pacific cyrtandras are geographically restricted to single archipelagos or even single islands. Researching how C. samoensis compares with other closely related species in the complex is needed to understand why this species has been able to disperse broadly while other closely related species have not. In turn, this information may help us to understand more broadly how and under what conditions certain species of cyrtandras become more greatly dispersed. Ultimately, this information will be used to test our hypotheses of how, when and why the genus Cyrtandra has managed to cover a third of the planet's circumference. 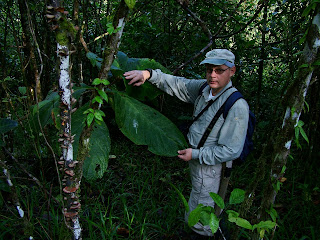 One final project that I have mentioned little, if at all, is a potential collaboration and field project in Costa Rica that we have established for Selby Research. I, along with Stig Dalstrom, Selby Gardens Orchid Identification Center Curator (pictured here with a Drymonia macrantha), recently returned from a week-long networking trip to Boracayan, Costa Rica - the wildlife refuge where we discovered Drymonia decora in 2003. The plan is to set up a collaboration with Boracayan and a Costa Rican research affiliate to conduct an all-vascular plant inventory of the refuge. We have already documented over 10 species of gesneriads from Boracayan. Our planned inventory project will most likely uncover more gesneriad species as we explore this botanically rich region of Central America. Look for more updates on this exciting endeavor in the coming year.