Background Info on the Solomon Islands

The Solomon Islands, located at 9° 41.25'S 160° 13.00' E, are a group of oceanic islands that were formed about 25 million years ago. There are over 900 islands that make up the archepelagio, Guadalcanal being the largest. The Solomons are known as outer-arc islands - the islands were formed from the collision between two (or more) tectonic plates resulting in the upheaval of land. The region 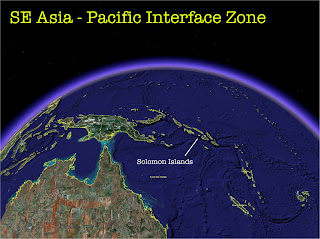 is known as the Andesite Line. Unlike continents and continental islands (chunks of land broken off from continents such as New Caledonia and Papua New Guinea), the Solomons are thought to be true oceanic islands that have always been separated by water from other neighboring landmasses.

The fact that the Solomon have been separated throughout their history is of great importance in understanding how and why species evolve on islands. Plants, such as the gesneriads I study, had to have made it to the Solomons by some means of dispersal. The question is how did new species form because of or following this dispersal and how did this lead to the great diversity we see in the Solomons and other oceanic islands of the Pacific? One main goal of the Vidaver Expedition is to collect plant specimens to further study this phenomenon.